This is a repost of a silly post which I just never thought would turn out as well as it did. Well, as it did IMO. Ya can tell by the dearth of comments that only one other peop did shareth my "holiday spirit" of that time.


Hhmmm. . . I just realized that every post since this one has been tolerant, positive, optimistic, up-beat or down-right sickery sweet and happy for the holidays.

Now, while I take back none of it (and really can't stop listening to BG an' Neddie's Opus o' Yule!) I do have to confront the reality that I'm a 41 year old double-divorcé, (semi)manic depressive and an under-educated, amateur politi-blogging, atheist non-breeder with few active fleshbot friends, the best (perhaps) of whom is away in NYC for the long holiday weekend, thus leaving me alone again, naturally**.

I awoke (alone again***, let's not forget) this morning to the (redundant) realization that that so-called "Saint" Nick ain't coming down my chimney, even if'n I had one in this black mold infested (but easily affordable) brownstown on the near west side of a (formerly) Red State (formerly) steel town in the (cardiomyopathically**** challenged) Heartland of America.

Lucky for me, I read so many blogs that I'm almost always a day or two (or 10) behind, so old posts frequently appear brand new pour moi, and I am able to rekindle the War Effort via teh Librul-Baby-Geesus-Hating Underground. 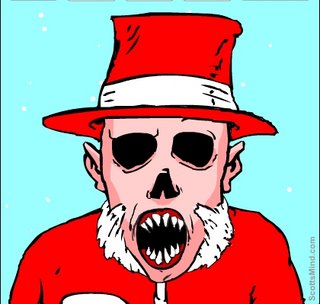 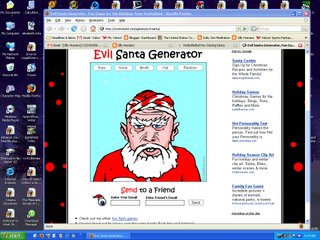 Thanks for the linkage, "Miss C"! Irony is Beautiful.

* Some Conservatroll over on Bobby Lightfoot's used the name of that band to poo poo my man Bobby's awesome expression of angst over his life in the music industry. Being a sometime Metal maven, I seriously love (no. I ain't gonna be embarrassed 'bout that shit, either! {-;) the sound of the band name. Kill Switch Engage! What the . . ? Guess I'll go ahead and add that to my litany o' woes in this post's 3rd paragraph.

** Yikes! I never listened to all the lyrics to that one, eh. (I mean, why?) No worries, folks. My Dad ain't dead, and I'm not throwin' m'self off no towers. Terminal, or otherwise.

**** {another-shudder} Yeppers, folks. I know that could very well be the mirror image of MY own heart, begging me to quit effing smoking already.

Thank you non-existent gods, God and goddesses, for teh fucking Internets!!!1!1!Q!1